Picture this: you’re forced to stay outdoors every night in the winter, with nothing but your coat to keep you warm. On top of that, there’s no place for you to take cover that’s dry and protected from the freezing air.
As the night goes on, you get chilled to the bone and damp from the snow. You wish for morning to come and the sun to come out, but the dark, cold night seems like it’ll last forever.

Most human beings don’t have to endure conditions like these. But the same can’t be said for man’s best friend.

The sad fact is that some dogs are kept outdoors consistently day and night, and because of this, they have to endure the most severe temperatures and climates every season.

Their fur isn’t immune to becoming wet and matted down, and this can make them freeze in the winter and roast in the summer. It’s now illegal in Pennsylvania to leave dogs outside for more than a half hour during severely hot or cold temperatures. In addition, pets can’t be tied up outside if it’s either colder than 32 degrees Fahrenheit or hotter than 90 degrees Fahrenheit. 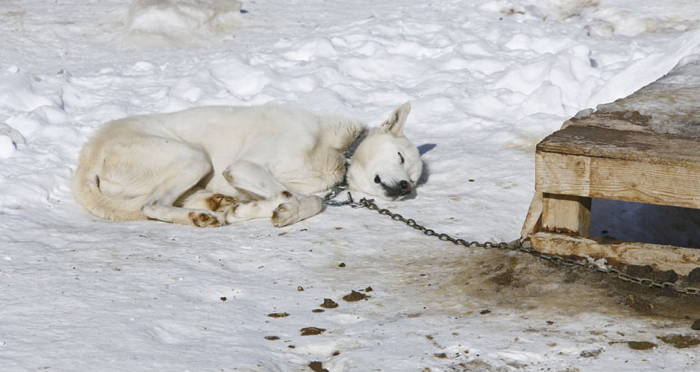 Libre was fortunately re.s.cu.ed from an a.b.u.si.v.e , ho.rrif.ying home life in southern Lancaster County in PA.

The new law was deemed an “incredible victory for animals” by the Pennsylvania Veterinary Medical Association.

Hopefully, now that one state has taken legal steps to protect animals during extreme weather, other states will fall in line and create similar laws.

Leaving a dog outdoors in severe temperatures is in.hu.m.ane. There is no excuse for it. Even if the dog is misbehaving and its actions are the reason behind it being outdoors,

Here’s a quick rundown of what to do if you find yourself in a situation where you see a dog that’s been left outside in severe temperatures.

This advice is based on recommendations from the Humane Society.

#1 Report It In Detail
Write down the time, date, and exact location, as well as the type of animal or animals in the unsafe situation. If you can, take photos or videos with your cell phone to corroborate what you see.

#2 Contact Local Animal Control or the County Sheriff’s Office
Show your report and any evidence you have to the resource officer on duty. If the situation hasn’t been resolved in a few days, follow up with them.

#3 Get Expert Advice
The Humane Society suggests that you also contact the HSUS by email or phone. While they aren’t a law enforcement agency and can’t take any legal action, they can give you expert advice on what you should do.